This past weekend, we ended up doing something I've always wanted to do.
Hopped in the car with a canteen of water, a camera, and an old fashioned map dated 1643...and hunted down some history. 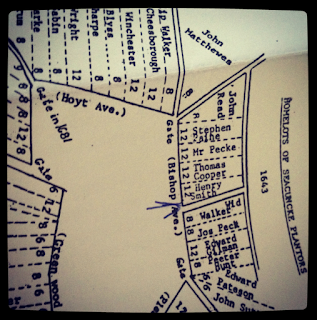 Remember this post? While I draw and paint for lovely clients, my genealogy bug is growing consistently. My birthday present, Family Tree Maker For Mac 2 (yep, pushing up the nerd glasses) finally came in the mail yesterday. Genealogy is morphing from a hobby into a creative focus too, something that is pulling on my author/illustrator/fashion designing tendencies...I'm working on some personal pieces based around this "world"...we'll see what happens! 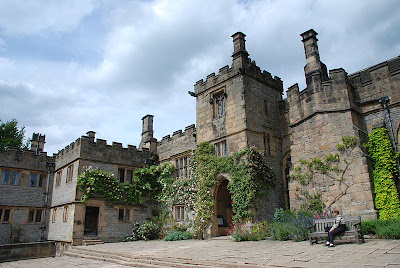 So, our destination was East Providence (Rumford, RI). We were hunting down the location of one of Matt's many Pilgrim ancestors: Master Henry Smith, and wife Judith : Matt's 11th great grandparents. Henry carried the "Smith" lineage over the ocean via the ship "Diligent" from his birthplace at Haddon Hall England to Hingham, MA in 1638, and eventually to Matt's mom. She is one of these Smiths and has loved her Masterpiece Classics for years, so the bit about Haddon Hall origination was happy news for her! Apparently, Matt's ancestors built and settled towns on all sides of the place we live today in Quincy...we've unknowingly completed many many circles just by moving here! 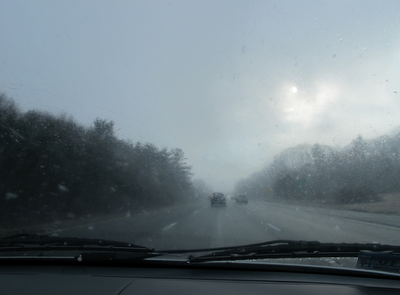 As soon as we neared East Providence, a really pretty thing happened: a SUN-SNOW-SQUALL! Right in the middle of it we realized we were essentially making the same trip Henry had made over 300 years ago... Hingham, the first place they settled off the ship, is next to our town of Quincy. Here we were traveling south to his new home in East Providence (imagine a snow squall without a car!) It probably wasn't the exact route, but most New England highways are paved over ancient footpaths. 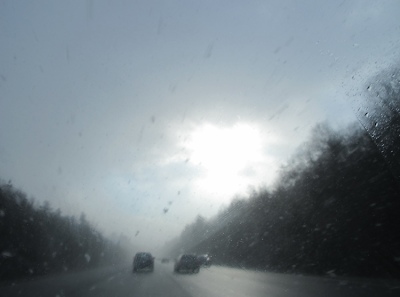 Once through the snow-sun-squall, we set off to finally find our Smith land! I held my new iPhone 4s GPS map against the blurry wiggly one dated 1643 and got ourselves to the precise location on Bishop Ave. where he settled at the "the Ring of the Green", after it was freshly purchased from chief Massasoit, part of the Bay Colony in 1643. We were a little saddened, but as expected, nothing still existed to shout out the historical importance of this place. (It was a defunct bakery, which only amplified sadness....nary a cookie in sight!) 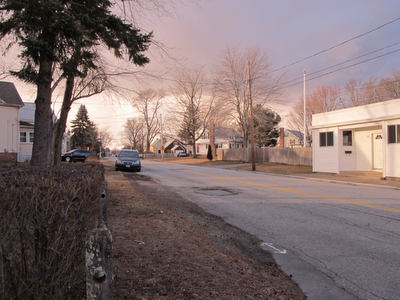 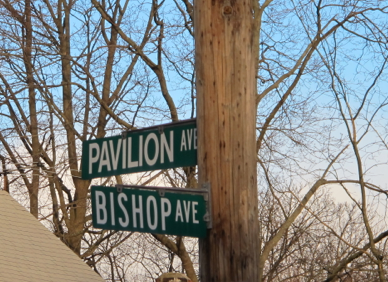 It's fascinating to think that our streets, especially in New England are so old. Bishop Avenue has been Bishop Avenue for centuries. Something I always think about: time and place. How can these times both be so real and belong to this one place? It's just this thing I've been trying to put my finger on and write more about: that we are of two worlds. Even though you can only sense and imagine one Bishop Avenue, and physically stand on the other. I think this is the history mystery that holds me captive... 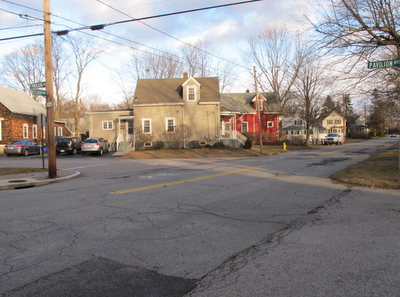 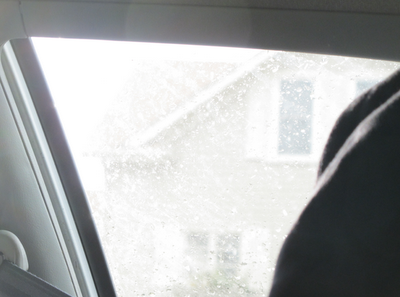 So we said "bye" to Henry and "thanks" into the wind and returned to the car across the street. As I fiddled with the GPS the car was enveloped in another blinding sun-snow-squall. The bright beauty of it reminded me that this place was special as we sat waiting it out in the car, ice rushing from the blue sky down the lane ahead toward the place where something important began. We wondered aloud, "Maybe they're happy we came?" referring to the long lines of lives that brought Matt right here and I felt supremely lucky he was by my side. It blew over in a few seconds and we were back on the road. 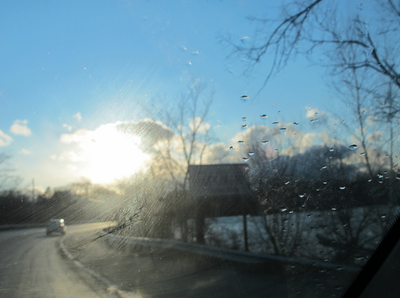 Exploring is my favorite way to spend a day. Thanks to Edna of the EPHS for mailing the map. Thanks to Matt for chasing some history with me. Thanks to Henry and Judith for Matt.

What a fun adventure--and so beautifully described!
I caught the same genealogy bug a few years ago...traced a bunch of lines back to the early 1600s in New England and NY (Matt's ancestors and mine might have known each other ;) ).

I bet they did! :) The small pockets of people in the early days really intertwined in New England. So fun.

Love reading about your adventures. Do you believe in reincarnation? Parts of your past lives still beckon.

Nice to hear places like Haddon Hall and Hingham. I have Haddon Hall china and Eldred Wheeler chairs (is their workshop still in Hingham?).

that is really cool! :) I like that you both share that enthusiasm for a history-based trip. ;) I hope you both learn more soon!

Hi Jama! Thanks for reading, glad you had fun. Well, I'm not sure if I believe in literal reincarnation, but I sure feel spiritual connection when I'm doing this research and going to these places, and yes I feel the pull! I like to imagine we're all making links between past and present all the time...

Yes, esp. since Haddon is the set for Jane Eyre and P&P (Matt's mom loves those so she was psyched her genes start there-I know u love your Mr. Darcy) never heard of that china or chairs! Now I have to go look those up :)

Thanks Mai, and Anne! x

Ah, that sounds like a lovely day... you make me want to take off on a family history adventure all my own! Those two worlds are so hard to process sometimes...I've been studying a bit of local history lately and it's a challenge to wrap my head around THIS, right here, used to be THAT and still is somewhere beneath the layers of concrete and history, still fresh in the memories of our oldest neighbors.

Thanks Jessica, you should one day-a great excuse for a trip to Europe!

And yes Sarah, you describe exactly what I mean so beautifully! I'm doing the same with local history here in Quincy (where are you?) I think it's what turned me on to that concept, which I've always thought about but never felt it so alive until you learn more about the layers where you stand...

Good luck on your own research, Sarah! Thanks for stopping by.

Not too many people from the same generation and within the same family get the genealogy bug. I am glad you got it! It is a rewarding adventure to learn more about your ancestors. I personally feel that each one of them is waiting to be "rediscovered". Back in 2002, I also started a genealogy search by myself. I am amazed by all the things I found and how so many people helped me out! Good luck to you and thanks for sharing!

Thanks and glad to hear you are having fun discovering your own ancestors, Marcela. I agree, each story seems to want it's own time in the light!

Very interesting...the bakery that used to be in this spot was recently closed (I'd say about 2 years ago.) It had been open for years and years, the elderly parents/owners retired and the sons/daughters couldn't keep up both the bakery and their day jobs. It was the last bakery in the area that made everything from scratch-cinnamon rolls to die for! I miss them. More interesting information, Matt's relatives and Steve's relatives probably both went to the Church-Newman Congragational-just around the corner from the bakery.

I was wondering about the bakery! I could still see shelves and trays in the windows...it sounded magical. So sorry we missed it by a few years.

And yes, they probably did go to the same church, the family was definitely part of Newman's congregation and are buried on the church grounds (More on Samuel Newman here: http://en.wikipedia.org/wiki/Samuel_Newman)

Also the Bliss Family and the Ide Families married in, and I understand "Bliss" or "Blyss" is still around present day Rehoboth (where you are!) and coincidentally, your shop is Bliss Antiques (but for other reasons, right? :) What was Steve's family's name?

Steve's mom was a Bliss (she died 2 years ago at the age of 90.) The land we are on is part of the original Bliss tract from the 1600's! A Bliss (Steve being the current Bliss from his mom's side) has farmed this land since the 1600's. They were founding members of the congregational church. Actually East Providence, and the Rumford neighborhood, was originally part of Rehoboth, Ma! I have the bliss genealogy dating from the early 1600's if you ever want to look at it. There is loads dating from the Newman Cong Church era. All very interesting, I just love reading about it. We have some old, old, old letters from the family too, which are my all time favorite things to read...I have some silver spoons that came over on the boat from england with the family. It is amazing to hold them, to feel the history.

Just wrote you a "BLISSful" email Jackie...Matt's "Bliss" is named Martha, she married the Ide family, who married the Smiths. All those Ring of the Green folks seem to be relatives one way or another, and of course neighbors. How cool :) Would love to hear more about your family's ties to Rehoboth! (and who your Bliss is!)

Long before it was a bakery, the building at 119 Bishop Ave was "The Rumford Handy Shop" a sort of cross between a hardware store, "5 &10 cent store" , notions ribbons and soft goods and in many other ways a truly 'general, small village retailer that met it's neighbors needs and somehow remained as if nothing had changed since the turn of the (19th) century. A truly wonderful place to visit -- and to buy penny candies