Springtime In the Portfolio

Before I start my painting today, I wanted to share Emily and her fat old cat, Mimo. They are new to my online portfolio (the latest from a batch of Sleepover book 5).

I've added a few new things to the portfolio too, did some spring cleaning (a GIANT thank you to Anthony at Shannon Associates). Things are growing, with the production of a lot of work for new assignments, a ton of learning and experimenting, and differing art direction from piece to piece.

Recently, each addition to my portfolio seems to be an extension of a developing style, based on the need for a particular voice for each story. From Pony the Hat, to the Riven Kingdom cover for Little Brown, to the cover for Scholastic's Sunny Holiday, they all seem to be working in dispersing directions. Perhaps they are just new little buds all growing toward the same light -time will tell. I am excited to watch where I am directed to next, without holding any reins too tightly. It is exhilarating for me to work in a range of voices. I love to keep all of it pliable and fertile; keeping style a living and breathing thing of its own.

I wonder if this piece today will give me another little clue as to where this little garden is growing to.
5 comments 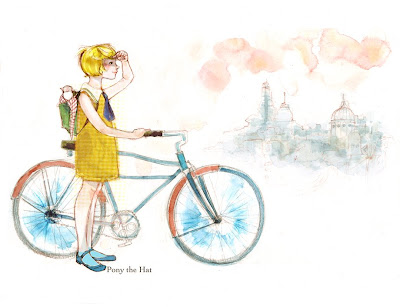 A few weeks ago, illustrator bud, Emily Goodale, and I decided to each make our own secret version of the plucky little girl named "Pony the Hat" from Erich Kastner's translated story, Emil and the Detectives. There is absolutely no explanation for her nickname throughout the text. Pony was so genuine and silly we couldn't contain our love for her, so we both decided to draw her.

For most of the story, Pony exists on a bicycle in a gang of boy sleuths, assisting them in tracking down a thief in the middle of Berlin (pre-WWII) She is the cousin of the protagonist, Emil Tabletoe. As a relayer of information between a worried grandmother and Emil's gang, Pony rides her nickel-plated bike to and from the city, thermoses of coffee and treats in tow for her boys. An essential part of the caper, she is often exclaiming things like, "Well, there's nothing like having a woman around the house." Keep in mind she is probably no older than 10 and likes wrestling more than her cousin.

We JUST revealed them to each other last week and decided to make a simultaneous post tonight for everyone to see! So here is my Pony, and here is Emily's.

P.S. Neither of us spoke of using a yellow dress or even hair and look what happened!
10 comments 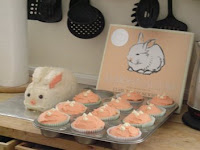 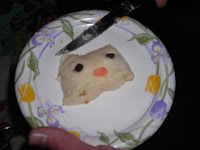 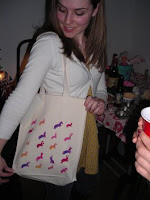 Hi there. So the cake came out well (look at the face slice!) Everyone really got into the theme with things brought and given and eaten. But really, the bunny to inspire it all was Marshmallow.

There were interesting gifts, including a tiny bunny in a cage from friend Emily, the book Prairie Girl's Guide to Life- Pioneer Project for the Modern Girl from sister Christa (right up our Frontier-loving alley) and many other thoughtful things. Look at the picture of the bag my friend Lee made for me. He put crazy leaping bunnies all over it and included a tag with the best rabbit story he wrote as well. Thanks everyone :)

On the work front: working on updating the portfolio again, working on new book covers, picture books. Had a great meeting at Candlewick this morning to go over my dummy. The book arrives in 2010!